Lenovo-owned Motorola is attempting to launch the One Vision on May 15.
Up until this point, a few leaks have confirmed that the smartphone will include a punch-hole design and a dual lens 48MP rear camera.
Furthermore, presently, only in front of the launch, full determinations and pricing details of Motorola One Vision have surfaced on the web. 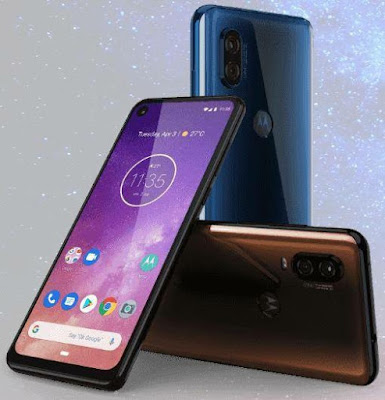 As per renders, the Motorola One Vision will include a punch hole presentation and a sizeable bottom bezel. On the rear, a 3D curved board will house a dual camera setup and a fingerprint scanner disguised in the Moto logo.
Regarding display, the smartphone is tipped to accompany a 6.3-inch FHD+ 1080×2520 pixels resolution LCD display with CinemaVision 21:9 aspect ratio and 432 PPI.

Motorola One Vision to get a 48MP dual-lens camera

Motorola One Vision will offer a double lens rear camera involving a 48MP main sensor with an f/1.7 aperture and OIS support, and a 5MP depth sensor.
OPPO Reno series set to launch in India on May 28
On the front, the phone is probably going to offer a 25MP (f/2.0) selfie snapper.
Allegedly, the main camera will likewise include AI filters, a low-light photography feature, movie-style shooting, and 4K video recording at up to 30fps.

As indicated by the most recent leak, the Motorola One Vision will be controlled by an Exynos 9609 chipset, matched with 4GB of RAM and 128GB of expandable memory.
Inside, it will pack a 3,500mAh battery and keep running on stock Android Pie OS.
In terms of connectivity, the device will bolster VoLTE, dial SIM, Bluetooth v5, Wi-Fi 802.11 a/c, NFC, USB Type-C port and a 3.5mm headphone jack.

As per the tip-off, the Motorola One Vision will be estimated at 299 euros and is said to land in Blue and Bronze color options.
The company is likewise liable to package its Motorola Verve wireless earbuds as a timely riser impetus in certain nations.
Loading...
READ  HP Chromebook x360 featuring Google Assistant launched in India