Samsung launched its line-up of Galaxy A-branded smartphones in India with the recently announced Galaxy A50s and Galaxy A30s models.
The two handsets include a natural waterdrop design, some geometric 3D structure on the back, a triple-lens rear camera, and mid-level internals.
Both are currently at a sale in the nation online and offline outlets. 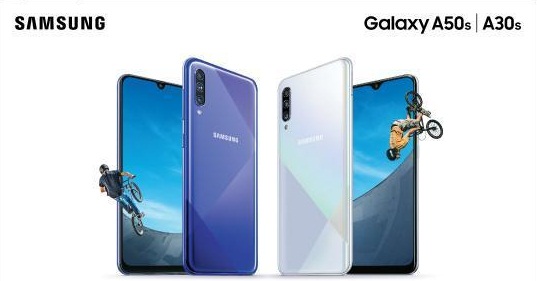 The Samsung Galaxy A50s highlights a 6.4-inch Super AMOLED display with a Full-HD+ (1080×2340 pixels) resolution, on the back panel 3D geometric patterns, and an in-screen fingerprint sensor.
It is controlled by an Octa-core Exynos 9611 chipset, matched with up to 6GB of RAM and 128GB of capacity which expandable up to 512GB via microSD.
Inside, the handset packs a 4,000mAh with 15W fast charging support.

The Galaxy A50s packs with a triple-lens camera setup

How is the Samsung Galaxy A30s?

In the meantime, Galaxy A30s looks a ton like the Galaxy 50s with a 6.4-inch Infinity-V display, 3D design on the back, and an in-screen fingerprint sensor. But, it just offers HD+ resolution.
It is sponsored by an Exynos 7904 processor, combined with 4GB of RAM and 64GB of expandable memory.
Finally, the handset packs a 4,000mAh battery with 15W fast charging support and runs One UI.

Samsung Galaxy A50s starts Rs. 22,999 for the 4GB RAM variation and Rs. 24,999 for the 6GB RAM model. Then again, the Galaxy A30s is priced at Rs. 16,999 for the independent 4GB/64GB variation.
The two handsets are currently accessible all online and retail locations.
With respect to launch offers, buyers will get double data benefit by Reliance Jio and Airtel.
READ  The Story Of Huawei Nova 4 Has Just Gone Viral! Feature 48 Megapixels Camera

Facebook is developing on an Operating System for future devices

5 ways you can recover deleted photos on any Android device