LG has added two new smartphones in its K-series, known as LG K62 and LG K52. Both new LG phones come with a special pattern, which protects the back panel from fingerprints. They also offer FullVision design and survived an LG 3D sound engine. Besides, both handsets provided quad the rear camera setup and equipped with flash Jump Cut and AI Cam features to give a better photography experience. Interestingly, the two phones also are MIL-STD 810G-compliant builds.

It comes with a 6.6-inch HD+ FullVision display with a 20:9 aspect ratio. On the rear, the LG phone includes a quad rear camera along with an LED flash and there is a side-mounted fingerprint sensor. 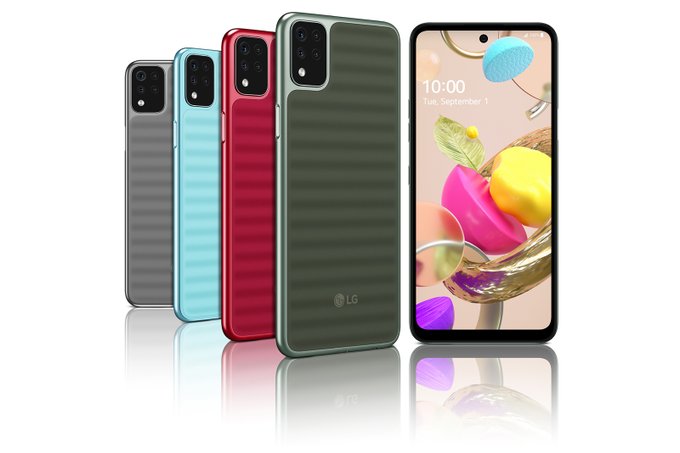 The quad rear camera setup includes a 48-megapixel primary sensor, a 5-megapixel ultra-wide-angle lens with a 115-degree field of view, a 2-megapixel depth sensor, and a 2-megapixel macro lens. On the front panel, it has a 28 megapixels selfie camera sensor.

You will get 4GB RAM and 128GB of onboard storage with an expandable capacity up to 2TB and powered by an octa-core chip. It works on Android with Q OS and to provide power, the LG K62 smartphone packed with a 4,000mAh battery.

This LG phone retains a 6.6-inch HD+ FullVision display with a 20:9 aspect ratio and it also gets a side-mounted fingerprint sensor.

This smartphone also offers a quad rear camera setup with a 48-megapixel primary sensor and a 5-megapixel ultra-wide-angle shooter with a 115-degree field of view. The other two sensors in the setup are 2-megapixels depth and 2-megapixels macro sensors. On the front, it sports a 13-megapixel camera sensor for selfies.

It is powered by the octa-core chipset paired with 4GB of RAM and 64GB of internal storage that is expandable up to 2TB. In terms of connectivity, the handset includes 4G LTE, Wi-Fi, Bluetooth v5.0, NFC, GPS/ A-GPS, and a USB Type-C port. It is also packed with the same amount of battery.

The two phones will be available for sale in Europe next month. There is no information about the price of both phones at present.

Nokia 215 4G and Nokia 225 4G feature phones have launched in the country. Both phones were originally launched in China earlier this month....
Read more
MOBILES

HTC Desire 20+ the newest smartphone has launched in Taiwan. It is worth noting that the company had earlier launched the HTC Desire 20...
Read more
MOBILES

Oppo F17 Pro Diwali Edition phone released in India and it offers a new gold model color. Along with this phone, the company also...
Read more