The Vivo V20 series will debut in Thailand on September 21, which has been confirmed by the company itself. In addition, Vivo V20 series smartphones in India can be launched in October. The series may include Vivo V20, Vivo V20 SE, and Vivo V20 Pro smartphones. A few days before the launch, the alleged specifications of the three phones have been leaked on Twitter. It is said that the phone will come with a 6.44-inch Super AMOLED display and 5G support. Also, these phones will feature a triple rear camera setup.

A tweet by the company confirmed that the phone will come with 5g connectivity. In a tweet, a well-known tipster the_tech_guy has shared the specifications of Vivo V20 series phones.

The phone is expected to have a waterdrop notch with a 6.44-inch Full-HD+ Super AMOLED display. In addition, the phone aspect ratio can be 20:9, the screen-to-body ratio of 90.12%, and in-display fingerprint sensor. 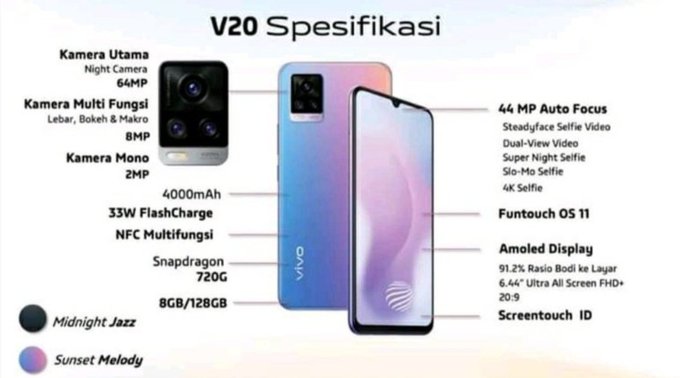 It is also reported that the phone will be equipped with Qualcomm Snapdragon 665 processor with 8GB RAM and 128GB storage. For photography, Vivo V20 SE could offer a triple rear camera setup with a 48-megapixel primary sensor. With this, there will be an 8-megapixel ultra-wide shooter and a 2-megapixel bokeh sensor. For selfies and video calling, it will include a 32-megapixel sensor.

The upcoming Vivo phone will have a 4,100mAh battery, with a 33W flash charge of 2.0 technology and work on Android 10 based FunTouch OS 11.

The Vivo V20 is said to be a waterdrop notch with a 6.44-inch Full-HD+ Super AMOLED display. Besides, the phone aspect ratio will be 20:9, screen-to-body ratio of 90.12% and there will be an in-display fingerprint sensor.

The smartphone will be powered by the Qualcomm Snapdragon 720 g processor with 8GB RAM and 128 GB internal storage.

Coming to the camera, the Vivo V20 also has exactly the same triple rear camera module as we saw in the Vivo X50 Pro. However, it is not clear whether this phone will also come with the Gimbal stabilization module. A triple rear camera will include on the V20 model, the setup will provide a 64-megapixel main sensor, an 8-megapixel wide-angle shooter, and a 2-megapixel monochrome sensor. This phone can be given a camera of 44 megapixels for selfie and video calling.

According to Gizmochina, the Vivo V20 Pro phone will be a rebrand version of Vivo S7 5G. It could come with a Full-HD+ 6.44-inch Super AMOLED display with a wide notch for dual selfie cameras.

The V20 Pro will be powered by the Qualcomm Snapdragon 765G processor and a 4,000mAh battery and 33W fast charging.

On the rear, the smartphone will house a triple rear camera setup with a 64-megapixel primary sensor, an 8-megapixel ultra-wide camera, and a depth sensor of 2 megapixel. It can carry a 44-megapixel sensor and an 8-megapixel secondary camera for selfies.

Google Sheets gets Smart Fill feature – Here is how to use

Google has introduced a Smart Fill feature to Google Sheets, letting the spreadsheet app detect and be taught patterns between columns to be able...
Read more
TRENDING TECH