PlayGo N82 and PlayGo T20 price in India and availability

The PlayGo N82 neckband comes with the price of Rs 2,999, on the other hand, the PlayGo T20 TWS cost is Rs 1,999. Both models are available for purchase on Amazon India, Flipkart, and Play website. 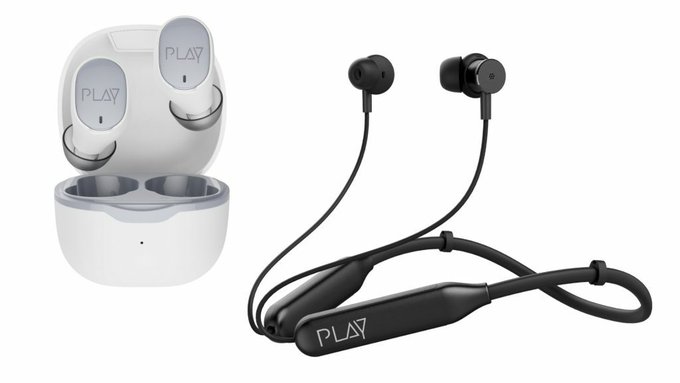 This neckband style earbud has three buttons for controlling audio, receiving and rejecting calls, and activating the voice engine. There is a button to control the active noise cancellation function. It includes 13mm audio drivers with dual switchable equalizers. The earbuds get an IPX5 rated build for water and sweat resistance.

The neckband comes with a built-in microphone for audio input and for connectivity you will find an advanced Bluetooth v5.0. Talking about the battery, the device provides as much as 16 hours of playback.

This is a truly wireless earbud that features proprietary audio drivers and environmental noise reduction. These earbuds have a microphone, which has been claimed to deliver HD call quality with noise reduction and echo cancellation.

Like other TWS earbuds, it also brings the Auto-Connect feature and uses Bluetooth V5.0 for connectivity. The device claimed about the battery that these earbuds provide as much as 5 hours of battery life on a single charge. Besides, the playback time increases to 11 hours with the charging case and the earbuds deliver you a total of battery life of as much as 16 hours.

Lypertek Levi, the most recent true wireless earphones now in the country at Rs. 5,999. A number of months before the company have released...
Read more